The Russell Hobbs 20750 Buckingham four slice Toaster armed with its 55% faster tasting technology* means you can enjoy tasty toast just how you like it, quicker – perfect if you’re running out of the house in the morning or feeding a large family.

Russell Hobbs was founded in the UK in 1952 by Bill Russell and Peter Hobbs, whose combined design and engineering flair allowed them to launch a company that remains a leading brand to this day. 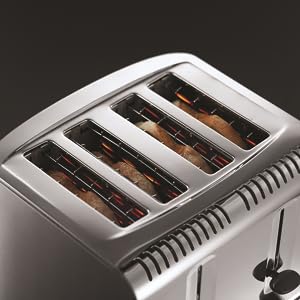 The wider slots have been cleverly designed to accommodate thicker slices of bread, buns, crumpets, tea cakes and more.

This handy feature allows you to adjust the level of browning on your toast to suit your taste buds. And if you like you toast lightly done but others like if darker, the independent variable browning control allows you to kill two birds with one stone.The higher the level, the darker the degree of browning. 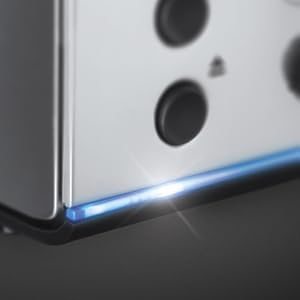 The illuminated light strip function adds and added element of sophistication to the toaster which illuminates blue during the toasting cycle.